Today over at Creations by Gill M it is the first of November's challenges.  The lady herself set the Design Team the challenge of producing a masculine themed card in monochrome.

Here is what I came up with. 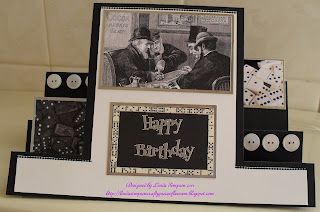 I have used black base card and made a stepper card.  The domino toppers are from Kanban and I have had them quite a while so it seemed very appropriate to use them for this challenge.  I have added white buttons from my stash and peel off Happy Birthday.

You don't see many people playing Domino's nowadays and I just love the image of the gentlemen playing this game.

Below is a little bit of history about Dominoes that is very interesting.

The game appeared first in China in in the 14th Century but the first recorded reference in Europe is from Italy where they were played in the courts of Venice and Naples. The tiles were originally constructed by gluing and pinning two sheets of ebony on either side of the bone tile. This prevented cheating by being able to see the pip value from the back of the tile in certain lights. It also served to produce nice contrasting white pips on black background by allowing the bone to show through holes in the ebony. The pin through the middle of the tile became known as the "spinner", for obvious reasons. Although tiles have not been constructed in this way for centuries, tradition has maintained the spinner which can still be found on many modern sets. Many players feel that it is still of benefit since it makes the tiles more easy to shuffle and protects their faces.

Although domino tiles are clearly of Chinese inheritance, there is debate over whether the game played by Europeans was brought by the Chinese to Europe in the eighteenth century or, in fact, was invented independently. European dominoes are shorter than Chinese ones and there is a single tile for each permutation of the throw of two dice or a blank making a total of twenty-eight tiles. This is the standard or "double-six" set and, as in China, various games can be played with it. Double-twelve sets (91 tiles) are popular in America and Double-nine sets (55 tiles) also exist.

I hope you enjoyed reading this little bit of history about Dominoes and we look forward to seeing what you make for this challenge.

Hi Linda this is absolutely gorgeous!!!!1 Wow so vintage and what a wonderful way to display these images!!!! Wow I really really love this!!!!1 Excellent work my friend!!!!!

Oh that is a great card. The monotone fits perfectly. Kim

WOW Linda not only a superb card but a bit of history thrown in there too ! cool. thank you for your inspiration for this challenge.

There was a nice samples of the masculine cards ,which attract the users .........Enjoying your inspirational work!!!!
Transparent business cards
Pvc cards

Linda Simpson
I am an enthusiastic crafter, who loves to create using wonderful papers, paints and stamps.

Woohoo I have been featured!